Back on my old blog, we had a pets category. Might as well continue the tradition.

It's July 4th weekend, which means there will be fireworks/firecrackers going off for a few nights. Ramen's not a big fan of loud noises, and hates fireworks. We're even close enough to Quantico, that when they have big booms going off over there all day, he hates that.

So, tonight he went and jumped in the bathtub to stay safe. I explained that we're not in a tornado, so the tub might not help much. 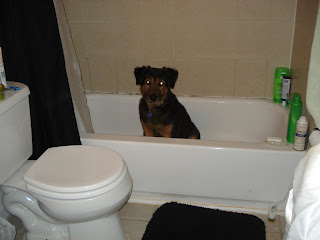 He also loves to lay around with his head up against something, or in corners. I was going to try to take several different pics of him in different positions, but he hates having his picture taken, so it's been kinda hard. This one is a pretty good example. 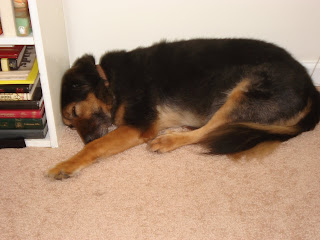 And our dear Little Man, dumb as dirt - or as we like to call him - very Zen. Dude can hunt, though. Apparently he's ran out of moles in the backyard and has moved on to little frogs. What's funny is, he just catches them, brings them in, and drops them. He'd already lost interest in this one.

That would be fine, except that the next one he brought in at 4 a.m. and dropped for Ramen to find and play with - which naturally woke us up. 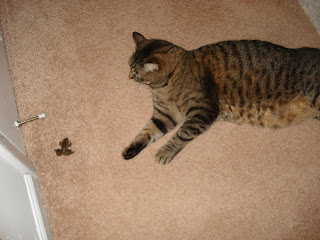 Life with pets, we call them our 3 ring circus. And now it's soon to be a 4 ring circus!

The cat's in training for a few years down the road, bringing frogs in for Noah to play with.