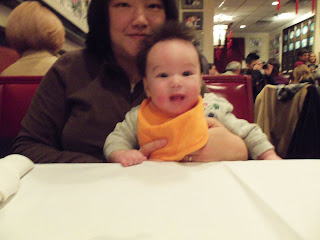 This picture does not even began to depict Noah Maxx's newfound joy at eating solid food! Over the weekend, we've made some applesauce, and made sweet potato mush for him to try out. We'd figured that we'll let him try the sweet potato mush first and then follow up with apple sauce after a few days. We also went to the store and got him two butternut squashes for his next food adventure after he tries the applesauce. The grocery shopping cart now has a distinct space for Noah Maxx's food!

We're pretty convinced that Noah Maxx is going through some kind of growth spurt right now. In the last 3-4 days, he felt heavier, and wasn't sleeping as much during the day since he kept waking up in hunger. It was apparent that formulas are no longer enough to keep him full. The GF took out a tape measure to measure him and his height was at 27 inches, and as we referenced his height from a month ago when he had his check up, he was at 24 inches....about a 3 inches growth over a month. His weight is now at 18 lbs., also a 3 lbs. growth from a month ago. We swear that most of these height/weight gains had happened in the last 3-4 days!

How did he respond to the sweet potato mush? He loved it! Ate a whole 2 oz. cup with gusto while we were having a late lunch with friends at a restaurant (His favorite place.) ! A bit later in the afternoon we mixed some oat cereal with half a banana and he inhaled almost the whole thing too! We had to take the cup away because he was starting to get sleepy and we were also afraid that his little stomach is going to explode or something!

I think his great grandma would have been so happy and proud of Noah Maxx, growing and loving his food! We're really happy too that so far he has shown a liking to solid food, but somehow we could not help it but to wonder about what if he is like one of these kids who are already 6 feet tall when he's 12? What if I have to get another job because grocery bills will soon equal mortgage payments? For those of you who don't really know, I EAT too, and probably eat more than I should be :-)

As the new year begins, we're just so happy to be parents to such a cute and pleasant baby boy! It really doesn't matter how much he'll eat, as long as he's happy and healthy!
Posted by Nerdstar at 7:19 PM