Whew, I'm still recovering from our whirlwind trip down to Austin this past long weekend.

We all got up about 5 a.m. Friday morning to catch a 8:23 flight. I really wish the flight had been a couple of hours later, but there just wasn't anything. We packed all of his stuff into a cool bag and one of Nerdstar's old army map bags. Then we got all of our stuff into one decent size carry on. Then there was the stroller. It was all manageable. We packed 3 bottles and a banana and some apple sauce. It timed out just right that he was ready for a bottle as we got seated and settled. Then he checked everything out for a while and then took a nap. He was a little fussy the last 40 minutes or so, but it wasn't anything terrible. 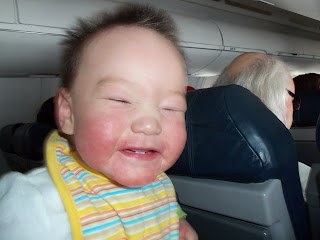 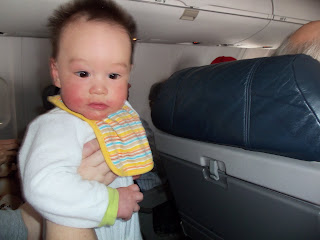 We got into Austin just in time for lunch at Whataburger. Yummy. Then we hit the hotel and waited for my family to come down from Dallas and Nerdstar's sister and her hubby to come over from Houston. I knew the weekend was going to feel a lot like herding cats.

Friday ended up feeling really long because Noah didn't take a nap, and we couldn't either. But, we all went out for dinner and it was good.

This is just a gratuitous cute pic! 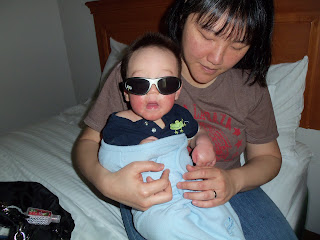 Saturday the three of us, my brother and nephew went down to Magnolia's for breakfast and to meet up with a dear friend who had moved out of the country several years ago and her hubby. It was so great to see them. They brought Noah the cutest little stuffed camel fro Dubai.

Then we headed back to the hotel so gather all the family up and hang out at the pool so my nephew could swim a while. Unfortunately, it ended up being a little cooler in Austin than we hoped. I should have known it would be though, it was always cool and windy on my birthday.

Speaking of which, our friend's trip to the states from Dubai for her friend's wedding, and it being the weekend of Nerdstar and my birthdays was what set this whole trip in motion.

We all had lunch at this little Taiwanese place we used to frequent all the time. More yummy.

It was Saturday while hanging out with family we discovered Noah has decided that Nerdstar and I are the only ones who can hold him. Uh-oh. Poor Granny and Pa and Uncle Jason and Aunt Jennifer! He'd laugh and smile at them all day long, they just couldn't hold him. Which was tough on Nerdstar and I - we were hoping to hand him off more!

Saturday evening some friends of Nerdstar came into town. So Sunday we all went down to Zilker park and had a great time watching the kids run around.

Noah got to swing for the first time. I think there will be a lot more of that if it ever warms up here at home! 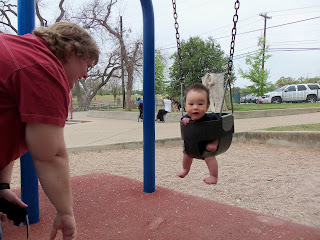 Everyone headed back home Sunday evening but us. Our flight wasn't until 5 p.m. Monday.

At 3 p.m. Sunday I was perfectly fine. At 3:30 I had a bit of a sore throat. By 5 I had the shakes from a fever. Ugh. This isn't the first time I've gotten sick from the germs on a flight, but it usually happens after I get home. Thankfully Zicam and advil worked wonders. I'm still recovering and congested and weak, but so much better. I was glad to feel good enough to get through the flight home!

Sunday evening another dear friend of mine came to visit. I realized how good for the soul it is to hear the voice of old friends. Emails just aren't the same.

Monday we finally got to sleep late. Then we took Noah to a chinese herbal medicine place we used to go to when we lived in Austin called Turtle Dragon. We're just hoping we can do more than manage his skin problems waiting to see if he grows out of it. The man gave us this chinese herb liquid to give Noah twice a day - and it does not taste good. Poor baby. He's good about taking it, he just makes this sad little "yuck" face and sound when he does. We gave him some orange slices after to help his mouth taste better. He also gave us a wash and ointment. He said if those don't work by the time we're about out, then we should consider having the blood test for food allergies done. We're hoping we don't have to, but will if it's necessary.

Anyway. Noah was so amazing on this trip. On the flight home last night he checked out everyone/thing on the plane and then slept for 90% of the flight. It was good that it corresponded so well with his normal evening nap time! He had trouble sleeping Friday, but after that it was all really smooth. He's always so happy to be out and around and seeing new places and smiling at new people.
Posted by Beth at 1:13 PM