A short note from Nerdstar 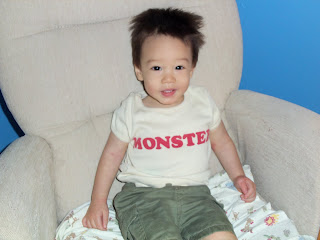 Noah Maxx is getting so very close to walking, that I am thinking that it'll happen anytime now. He is already standing up on his own from time to time, and had even taken "baby steps", but as soon as he realized that he was standing on his own, he'd quickly sit back down.

We had also shaved his head for the 4th. time in his short life. If you don't look at him from his right side and the backside, his haircut actually looks pretty good!

I included a pic of him before his shave.

His skin is still an issue, but we're doing to best we can to try to not let it get worse.

Overall, he's just growing in every way and we're still so happy to have him in our lives!
Posted by Nerdstar at 9:21 PM