Today was a really good day for Noah and I, right up until it wasn't. He played, snacked, we went to the store, he played and snacked some more. And then it was getting to be what I thought was nap time. He's switching to mostly one nap a day, and sometimes that nap is later in the afternoon, sometimes earlier. It was getting close to 3 and we were both tired, so I put him in bed. There would be moments of quiet, and then moments of talking, making noises. I kept thinking any minute now sleep would take over.

The bottle and rocking seem to work so I put him back in bed and he finally falls asleep a little after 4. Oh thank God. I head downstairs to relax and watch last night's sit-coms until Nerdstar gets home around 5-5:30. Imagine my dismay when I hear rather loud crying at 4:45. Sigh.

We call Nerdstar on the cell phone and he likes to talk to her until she gets home.

Once she's home I hand him over for a while and finally go downstairs to relax.

About 30 minutes later I come upstairs to this scene: 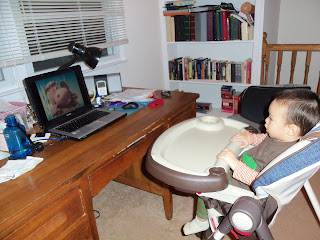 Creative bad parenting!! I laughed, and then of course took a picture! She had his you.tube list playing for him while she was cooking part of her dinner.

We keep talking about getting him a little tv that has wi-fi so he can watch his videos in his room or something - but he's only 1!! We don't even have a wi-fi tv in our bedroom! (or wi-fi tv at all)

But, I keep telling her - you can't do something once you don't want to do a thousand times. In a few weeks he'll be able to drag his high chair over by the desk - and that's not something we want to get started doing!!
Posted by Beth at 7:11 PM

I'm so far behind reading, but I totally know how this feels. Last night she watched elmo on my ipad so that i could just not thing for the 5 minutes it took to play. Parenting win, I say.

We talk about getting Noah an iPad or kindle or something, or a wi-fi enabled little tv for his room, but still think he's just a little young. But, for him to watch videos he has to sit on our lap at the computer.