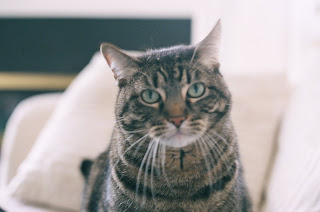 We got to the vet's office about 3 p.m. yesterday to check in on Little Man and talk with the vet. We were leaning toward going ahead with the surgery to remove the mass because that seemed his best chance at getting better.

As we talked with the vet it really became clear that the surgery was very risky and really wouldn't buy him much time, even if the mass wasn't cancer. We also decided that although we could take him home for a few days to spend more time with him, he just wasn't well enough, or strong enough, and it seemed selfish.

We decided to go ahead and have him put to sleep. Nerdstar took some time and said her goodbyes and then I stayed with him during the process.

What makes this more sad for us is that it was so unexpected. He's apparently been sick for a while, with the mass growing, but up until Thursday evening, there was no sign of it. And, we just lost our cat Silly six months ago, also rather unexpectedly.

Little Man was our big, special (short bus special) kitty. I was working at Whole Foods in Austin and a lady came through my cashier line holding him. I asked if it was a boy cat and she said, "yes, do you want him?" Of course I did! I had been wanting to get Nerdstar a cat for several months. She went out to the car and brought in a box with a little litter box, a blanket and a little teddy bear in it. I surprised Nerdstar with him when I got off of work.

He was a tiny little flea bag with huge paws. We took him home and washed him up and named him Little Man because we knew he was going to be huge! And he was.

He was also a simple minded cat. We've always joked that the people who had him as a kitten must have blown pot smoke into his face. It took him a year to learn his name. And he didn't become a snuggle kitty until Nerdstar was away in Iraq.

As simple as he was, he was a fantastic hunter. When we lived in Austin, he would catch geckos and every morning we'd have to dump them out of his food bowl. Everything he caught ended up in his food bowl, and if there weren't critters to hunt, he'd hunt down all the cotton balls and q-tips in the house.

He also hated when he could see the bottom of his food bowl.

I'm going to miss being sandwiched between him and Nerdstar this winter to stay warm.
Posted by Beth at 8:48 AM

Again, I'm so sorry. He was a very handsome fellow!

I'm so sorry for your loss. It's always hard to lose a loved one. And Meridith is right, he was a very handsome cat.