I am so excited for Noah because he is just so darn happy now that he can walk around. He's wanted to be in motion for most of his life, and he finally is. He walks around chattering and laughing. He's very close to running.

Somehow we missed the memo on the overdrive switch (or invisible meth drip) that comes with walking. We're assuming he's in a big growth spurt because he's been eating about twice the amount he was eating. Now, he's not eating any new foods yet, just a lot more of the regulars. When he's not eating, he's walking and walking and playing and walking. Yesterday he didn't nap until 4 pm, and then only for an hour. Thankfully, today he napped from 11 am to about 1:15. He's also waking up hungry in the night sometimes. I told Nerdstar it'd be nice if there was some sort of bottle holder thing like in hamster cages for his crib.

Also, for the first time, I've sent Noah out and about with Nerdstar without me. I've got the whole house to myself without having to worry about when he's going to wake up! They're going to lunch with some friends and then to the Korean grocery store. I told him he had to be good for her like he is for me!

A couple of funny pics: 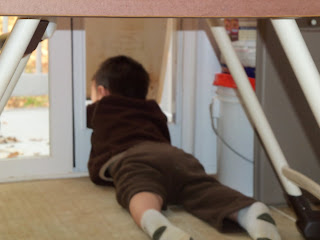 For some reason, he's decided that this shelf of his changing table is a great place to take breaks when playing. 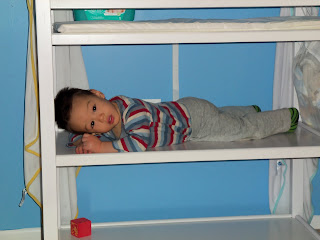