Just a couple of things we find fun. For a long time now, Noah sometimes structures his "sentences" so that he says a few things and then laughs. We think it's cool that laughing is something he does quite a bit. Then, about a month or so ago when he was eating, he made a sort of "GULP" sound and when I laughed at him, he did it a bunch more times trying to make me laugh. Now he'll do it every so often. It's pretty darn cool he's already trying to make us laugh. We're sure there will be lots of nonsense stories and joke telling if he ever decides to speak English!

He's also always made me hold him up to see out the windows in front of the desk anytime he heard people/kids or trucks. The other day, I realized he's tall enough and (hopefully) careful enough to put his step in front of the window so he can look out anytime. It's pretty tall for him to get up and down from, but so far he's done great with it and loves looking out throughout the day. 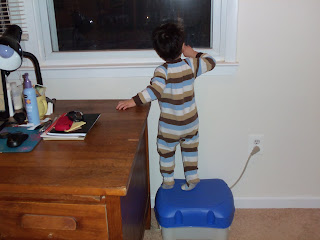 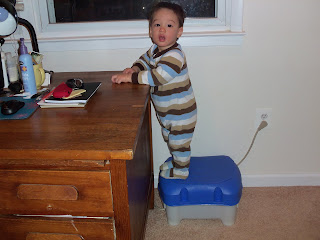