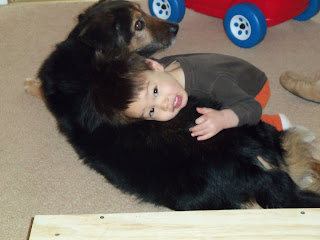 I'm not a big fan of Ramen dog (he annoys me with his constant in-the-way-ness), but I am so grateful he's good with Noah. Ramen hates hugs, but every once in a while Noah will stand by him and lean on him and give him a hug.

Twice we've gone to a store and Noah saw a stuff animal and wanted it. Thankfully, he let us put it back before leaving the store, but he hugged on it while we were shopping. So cute! He's has two Pooh bears he'll hug and kiss on.

Noah used to shake his head NO when strangers would get too close. For a while now, he does this thing when we annoy him of batting at his ear/s. Twice this last week, he's batted at his ear when strangers have talked to him at the store or mall. We're not sure why this annoys him.

On the flip side, he actually hugged a little girl his size at a play area in the mall yesterday. It was funny watching them try to figure out how to disengage and back up.

Last but not least, his "yeah" has started to sound just like Lumbergh.
Posted by Beth at 8:59 AM