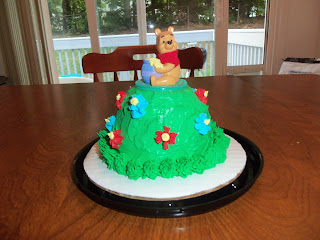 Just to note, that the reason why I've only selected a picture of Noah's birthday cake to post was because the other pictures that we've taken were really not all that good. He was so tired by the time that we've got the cake and Ritz crackers got more of his attention than the cake itself. If we get the pictures which were taken of him by a much more competent photographer while we were at C-Ville, we'll post them!

Noah is finally 2! Lot of things are happening with him, not only is he growing taller and heavier, he is also developing a taste for the types of music that he likes, experimenting with more ways to annoy us just enough so we'll do what he wants (think about a human siren that rings nonstop), and goofier than ever before! We caught him checking himself in the mirror this evening, not only was he smiling at himself, he was also posing!! We just about laughed both of our asses off!

I really look forward to going home after work everyday to hear him laugh and cheer at my arrival, his "updates" on what has happened during the day, and me chasing him around so I can try and catch him after his baths (he can now get out of the tub himself and if you don't get his just right, he'll take off running.) so he doesn't pee on the floor, which has happened before.

He has brought such joy into our lives, that pretty much nothing can compare to it. I just hope that we will continue to do our best to keep him happy, goofy, and healthy!

And yet another new thing, our little man has developed a serious baby look!