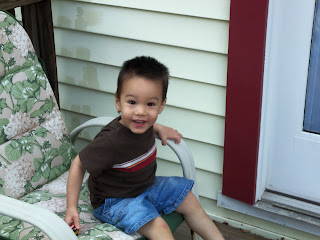 Just in case either of us have forgotten to add a fairly recent picture of Noah Maxx, here it is!  He's about a week away from turning 2, and thank God that he's still happy and growing!  Yes, there is the adenoid surgery coming up, but we are hopeful that it'll alleviate a lot of his speech and breathing issues.
I (not the SAHM)  am at a much better place now for work than before, now it takes me about 20 some odd minutes to get there, versus the one hour and a half that it used to take me.  So that means more quality time in the evening with Noah, I might not always be the person who gets him in the morning but I'll just about always be the person that he'll see at night before he goes to sleep.  Speaking of sleep, at times, it feels like a crap shoot.  At times, he'll wake up in the middle of the night for no apparent reason, and he never seem to sleep more than 8 or 9 hours (sometimes less) at times.
Both Beth and myself are, I think, going through lots of physical changes in terms of not feeling our younger selves as much.  We are both just about always tired and keeping up with Noah Maxx's energy levels makes us wonder if we should just be on meth or heavily infuse ourselves with caffeine.  Times like these makes me miss my grandparents even more, they practically raised kids all of their lives and did not seem to be tired at all.  It seemed like they just shouldered the burdens of everyday life and then some without the help of drugs, psychotherapy, or any of these child-rearing bullshit advice that is running rampant today.  I hope that one day, no matter what happens, Noah Maxx will know that we've tried to the best of our abilities to raise him.
I am so glad that, on a lighter note, that our boy has a sense of humor!  He'd frequently find things, videos, people, and his own physical movements amusing without being prompted.  I mean, how do you explain humor to an almost 2 year old?  I so am hoping that he'll be easily amused throughout his life, it's a great coping mechanism, and it sure beats being so worried that you give yourself an ulcer!
We are going to get out of town, to that oh so conservative college town two hours south of us next weekend on Noah's birthday. We will try to get another set of pictures taken by my army friend's wife, so here's hoping that the weather and other circumstances to which we cannot control smiles down on us!  He had already gotten most of his gifts early, stuff ranging from new clothes to new toy cars, plus a new tricycle made by Radio Flyer that he seems to like a lot!
So glad that Noah Maxx is in our lives, and that he's such a good kid!  Praying for success for his surgery and we love him very, very much!