Took a while but I've realized that most of the fellow gay people that I know have struck me as even more closed off and prejudiced than a lot of my straight friends. Some of my straight friends, in turn, are even more gay than I could ever hope to be, in terms of their past experiences and how supportive they are of gay rights.

By closed off, I mean for those fellow gay people often claim that they are open minded and liberal, until they meet people who just happen to not share their opinions or are more conservative than they happen to be. It must be nice to be in a world where all your friends and acquaintances share the same opinions and values as you, plus agree with every damn thing that you say, but I, unfortunately, don't live in that sort of world.

I wish that when Noah grows up, he will have friends from all walks of life who don't necessarily share his political or religious views, and instead of block them off of his gmail accounts or facebook friends list (assuming that gmail, facebook, and whatnot are still around when he grows up) That he will be able to calmly discuss and learn from the differences between himself and other people without thinking that the world is out to destroy him. Yes, there will be people who are hostile and just cannot stand to see you happily live your life, but that is where some maturity, a strong dose of sense of humor, and a black belt in karate will come into play.

Oh, and about the Chick fil-a fiasco? Two of my straight friends have actually stopped going to Chick fil-a, and what did I do? I went to Chick fil-a drive through, got my #8 extra spicy chicken sandwich from the gay attendant and ate it right in front of my friends. I must really, really hate myself. C'mon people! 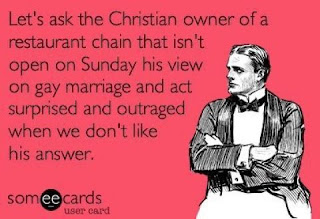 You went to Chick Fil A? The money they donate to organizations, YOUR money that you just gave them, goes to work to take away your rights to your child, take away your rights to your partner. I can't believe you support an organization that donates money to work directly against you, your partner, your child. I suspect that one day when your rights to your child or partner are denied to you, then the reality of what you support may really hit home. I truly hope that you are reading and educating yourself what these organizations are doing. It seems like you're so caught up in being a conservative christian, working against anything and anyone that is liberal or democratic, that you don't see the reality of how these organizations are working against you.

When you sign your real name I'll respond to your comments.

To anonymous, thanks for the hate, this is exactly what I've said about people who are closed minded, and not open enough to have a calm discussion about it. Don't assume we are not informed. Thank you though, for not eating at chick fil a, that just means more for me to eat. It's a pity to waste such delicious chicken on the likes of you anyways.