Ching is once again switching from one contracting company to another one, so she decided to take a week off in between so we could do a road trip/vacation.  Almost everyone here in Virginia goes to one beach or another for their summer trips.  Having an aversion to lots of sunshine (sunburns and skin cancer) and heat and humidity, summer beach trips aren't at the top of my list.  Noah won't get in water with waves anyway, so we can always go in cooler weather and just run and play in the sand.  Ching and I would love to go to a nice place with casinos, but we'd also need a babysitter for Noah there if we wanted to do any gambling together.  So we nixed that idea.

Really, our biggest goal in vacations is usually to eat some really good food.  I know you're all more than aware of just how much we hate the local offerings.  Sigh.

We became more aware of Nashville as a possible destination a few years ago when another lesbian mom couple who lived there had a blog.  They gave us some good recommendations on food and things to do with Noah.  I also knew Tennessee was a beautiful state to drive through.  We have thought about going to Dollywood, which is actually a little closer, but Noah's not so much into amusement parks and rides and such yet.  Maybe another year.

So, we looked up driving time and decided we could do it.  (It ended up being twelve hours instead of the ten or so we thought, but still within a day's drive.)

After our first day of driving, we stopped at the Black Eyed Pea to get some dinner and fried green tomatoes.  Yum.  Thankfully the place was mostly empty on the Monday evening, because we knew after being in the car all day Noah wouldn't be so great at sitting still.  He spent a lot of the time playing waiter.  It was new and funny and cute.  He'd make a great waiter!  We also got lucky that our actual waiter told us of some additional places to eat in a new-ish, hipster-ish East Nashville neighborhood that wasn't all that far from our hotel.

I got smart on this trip when finding a hotel and put all the places I knew we wanted to go into Google maps and then found a hotel within that vicinity.  One of the reasons we like road trips as opposed to flying is having the car to do more exploring and driving around in the cities we visit.

I had also checked the weather for the week, I knew we'd be driving in rain on Monday, just didn't know it'd be so much, or such downpours.  It was still a little wet out Tuesday morning, so we went to the Adventure Science Center.  It was really cool.  It had two things Noah loved, an ambulance he could pretend to drive, and a big mouth you could try to throw soft balls into as it open and closed.  (Actually, Ching had just as much fun with that!)

The next day we went to the Nashville Zoo.  There was a lot of walking, a lot of skinny moms, and not so many animals.  It was kinda ok there weren't a lot of animals, because Noah just wanted to run and run on all the trails.

Nashville also has a full scale replica of the Parthenon.  It's part of the huge Centennial Park.  There was also a local outdoor Shakespeare presentation that Noah sat through about ten minutes of going on.

Other than that, activity wise, we went down to the pool every evening.  Noah spent the first two days sitting on the steps, not going out into the pool at all.  Even with other kids there, he's engage with them, but not get out in the water.  Finally, on the last day, he let Ching carry him all around the pool!  So brave!

As for food.  Yum!!  Southern cooking for the win.

We had the best hot dogs ever at I Dream of Weenie.   This was the first place we tried in the hip neighborhood.

Then we tried Martin's BBQ.  Oh my.  Best bbq we've had outside of Texas.  It was so good, we went back for lunch another day.  Their brisket sandwiches are put on Texas Toast - so how could it not be good.

For lunch another day we went to Batter'd & Fried Boston Seafood place in the hipster neighborhood.  Sounds crazy.  But I had the best fried seafood platter and Ching had an enormous platter of fresh sushi! 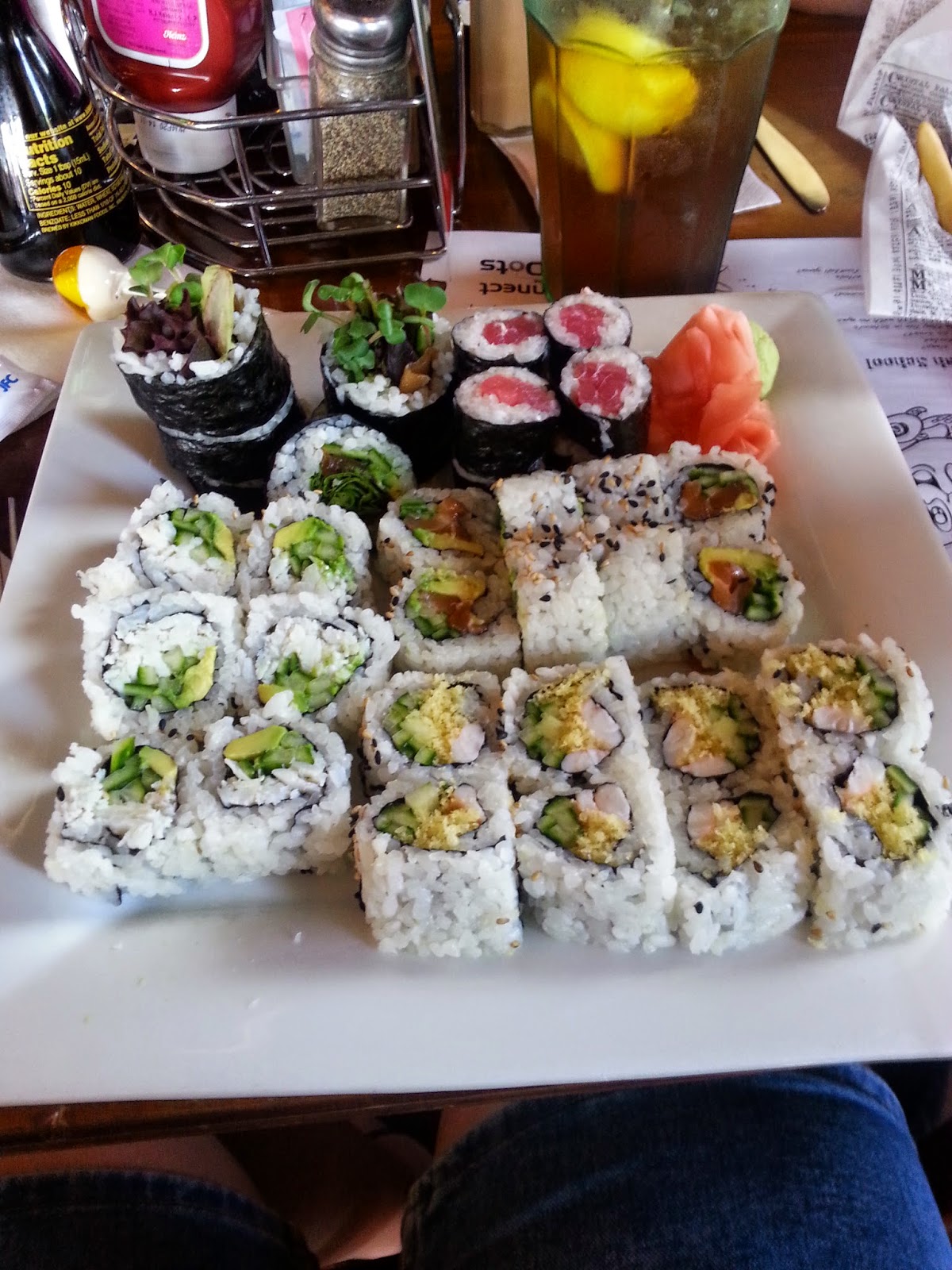 Our last morning there we decided to find a good southern breakfast.  There were so many choices, but we went with Loveless because they're supposed to have great buttermilk biscuits.  It, too, lived up to the hype.  Ching came home with a couple of jars of jam!

We enjoyed our little stay in Nashville.  It often reminded us of Austin - but a more southern, conservative, less hip and rich version.  I would probably prefer the Austin of 15 years ago, but the Austin of today, with it's overgrowth, would be harder to choose.

It also led to me pondering, too much, about the difference between being a Texan and being a Southerner.  I have a feeling a lot of the difference has to do with Texas' limited role in the Civil War and such.
Posted by Beth at 1:01 PM